V Yonkers
Education, the knowledge society, the global market all connected through technology and cross-cultural communication skills are I am all about. I hope through this blog to both guide others and travel myself across disciplines, borders, theories, languages, and cultures in order to create connections to knowledge around the world. I teach at the University level in the areas of Business, Language, Communication, and Technology. 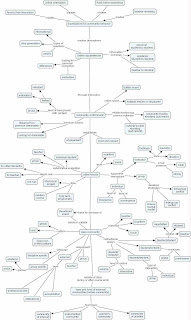 Tony and Michelle's comment on my blog about "simplifying" a framework to make it accessible reminded me of the comments members of a group of researchers I belong to are always saying about my models/frameworks: They are very complex.

On the left is an example of one of the more complex ones which took research on community building and created a model of online community building. Needless to say, this is a framework in which many felt overwhelmed by the model!

However, I guess one of my problems is in determining how this framework for identifying work literacy will be used and for which audience. I found Tony's model as one of "information search", or even information literacy (which those in the field of library science have really been doing a good job on formulating), but not work literacy. I think it is important also that we distinguish between "knowledge work literacy" and "work literacy" which requires new knowledges in the 21st century.

Knowledge work literacy (as I see it) is the understanding of the underpinning knowledge, organization, environment, and skills needed to accomplish work that is knowledge based (as opposed to material based). Michelle has outlined some good ways to categorize knowledge work. However, I would use different variables to format knowledge work: people to people knowledge work (customer service, social worker, mediator, consultants) technology to technology knowledge work (ITS, programmers, technicians, network developers), technology supported people interaction (retail, instructors, e-commerce, e-learning, radiologists, lab technicians), and information reformulators who, today, usually use technology to reformulate (analysts, librarians, journalists, web developers, instructional designers).

Work literacy, however, requires a broader vision of what is needed in today's work place. Our work processes have become much more sophisticated and complex in more traditional industries (i.e. manufacturing) which requires a higher level of thinking and access to information if a company is going to maintain a competitive edge. This makes categorizing "knowledge work" a bit more difficult. However, I think we can still apply the above categories used in knowledge work to the type of duties required by the worker. For example, within a manufacturing company, you have the personnel department who work primarily in people to people jobs. They are also information reformulators, however. Production supervisor duties are computer supported people interaction, but may also require technology to technology tasks.

Applying the new work literacy framework to the categories of workers

Now, applying the skill sets I identified previously to the category of knowledge work, we can identify which skill sets workers need to be proficient at or need training in to be "literate" in their job. This allows a more flexible and systematic way to analyze a position and what is needed to be literate for the position (rather than one size fits all). A personal assistant to the CEO in a Manufacturing plant will do both person to person duties, information reformulation, and, in many cases, computer supported person interaction. In the first case, he or she will need to have good social skill sets and good socio-cognitive (or collaboration) skill sets. In the second case, he or she will need to have good cognitive (or thinking) skill sets and socio-cognitive (or collaboration) especially at such a high profile job in order to network and put information into context for both senior management and outside stakeholders. In the final case, he or she will probably be evaluated on his or her ability to communicate and prioritize information using technology skills (such as typing X words per minutes), so performance skills will need to be used.

Process for Developing the Framework

Obviously, this is a complex idea which can't be accomplished overnight (and will probably take several years). As the comments and additions to Tony's original post suggest, there is a lot of information out there, but little work done in trying to make sense of the pieces and bring it into an accessible framework for trainers, educators, and management to use. On the one hand, it is important to make any framework we establish accessible to trainers, human resource personnel, elearning specialists, managers, educators, etc...On the other hand, it is important that there be a framework that can be used for ALL knowledge work and flexible enough to capture the complexity of today's work environment.

I would suggest that we begin by:

One note of caution: the job duties and skills needed to accomplish them will change. That is why it is so important that we identify categories that will be general enough to capture the essence of the work, but not so specific that it will be outdated in a couple of years. We need only look at the Boston Consulting Firm's 4 categories of market placement (the cash cow is still useful today as when I learned about it 20 years ago) or Roger's stages of adaptation (still used 40 years later).

Tony and Michelle are right in wanting to develop a framework that is accessible to anyone. My graphic above is an example of something that is too complex for most to follow. At this point, though, I think we need to first make sure we have all the pieces before we begin to oversimplify the framework. As someone who tends to write too directly, it is easier to edit and consolidate, than it is to add on and create.

This is going to be one of my long comments.

I wonder if we have not already been through times when what we’re looking for here was already well defined. The ‘check list’ that you mentioned Virginia, correct me if I’m wrong, seems to match what used to be contained in specifications to do with the workplace. In the 80’s, for instance, it was not uncommon around an office to find specifications that defined various actions and expectations about anything from what a computer application was expected to do, to the tasks expected of the employees.

Training manuals that were created for the office software would incorporate elements of the business specs and the system specs within their training sections. Sometimes the training manuals incorporated the user specs. In essence, they contained what was considered the basics of what the user had to know to be able to perform the business. Manuals of that description are rarely provided in the workplace now.

There were many ways training manuals as such could be written, and in those days they were printed texts. Depending on the budget available, the author had to be able to assess what ‘pitch’ to take when it came to writing the text. It was always easy to test a manual to see if it was useful, part of the job as a trainer. On visiting the office where I’d completed the delivery of training and the business was well underway (implementation complete) I would ask to see one of the training manuals. Invariably I’d be given a well-thumbed dog-eared ring-bound manual that delivered a pile of loose pages at my feet when opened.

Manuals that were useless were returned in pristine condition. Fortunately this didn’t happen much, but manuals that met this criterion were usually written on limited budgets as overviews, outlining only a brief functionality of the software with perfunctory instruction to the user. In short, they didn’t really cover what we might now refer to as the elements of workplace literacy associated with the particular application. Users found such manuals virtually useless.

All the dog-eared well-thumbed manuals were regarded as gold when they went out of print. They would be explicit in defining the step by step needs of the user as well as the skills required – not unlike the instructions found on Sue Waters’ helpful blog-posts. Why were these books regarded as so valuable? I believe it was because they contained so much pertinent, useful and usable information. Now I’m not advocating a return to these days. Workplace budgets would not permit that anyway. But on reflecting on the sort of skills that were outlined in the books, and they were many and diverse, they gave a very clear pitch on what was required knowledge and a summary of the skills required by the user.

One of the reasons these days have gone is the ever changing requirements for new software and new business procedures in the workplace. The cost of training and the documentation that went with it became a substantial part of the implementation budget of most business projects. What happened was that training was kept to a minimum or simply not provided at all. This all happened around the last decade of last century. What went with it were the procedures for defining what was required of the user in the workplace and the awareness of the need for these to be well defined and documented.

Interestingly enough, the process you described as no longer being existent is exactly what my husband does! He is a programmer by title, but he really is the person that identifies user needs, creates the specs for "canned" programs consultants create, and develops user and programmer documentation (online format).

I think the process you outlined was changed at the end of the last decade because of the outsourcing of work. It is not that the process has changed as much as the locus of knowledge has switched from the creators and users to the project managers. It is no longer clear where the knowledge is (thus the amount of knowledge management research out there).

I agree with you that we have gone through this process before. I think as new frameworks are required, there should be a systematic analysis of what the impact of systemic changes will have on stakeholders.

I have been employed by two major companies in the last 20 years. In the first I was a computer trainer. I worked closely with other employees who had the skills that your husband has. I wrote training manuals and sourced the knowledge from the organisation to write those. The reason I had to leave that job was because training was restructured out of the organisation - something that was happening almost globally at that time.

In the second I've been a teacher, team leader and elearning teacher. I have had little to do with computer training but have observed it happening (or not) over the years.

I agree with what you say about it being no longer clear where the knowledge is. The changes in information management in both organisations that I worked in over that 20 years were similar and not unlike the changes that have happened with instructional information associated with software and the function of electronic devices. It can be summarised in one sentence that was said to me over a decade ago when I asked for a computer manual - "No one uses a computer manual!" There were two reasons for this. One was that some people couldn't be bothered reading instructions (what's new?) The other is that there aren't any manuals any more (a generalisation).